ON SALE NOW: Russell’s NEW book “On the Outside Looking In”

ON SALE NOW: Russell’s NEW book “On the Outside Looking In”

“On the Outside Looking In” 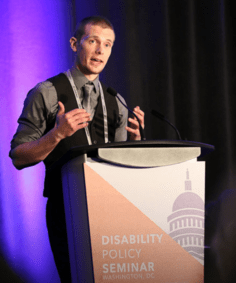 Russell Lehmann is an award-winning and internationally recognized motivational speaker, poet, author, and advocate. His words have reached over 20 million people worldwide, from the United States to Argentina, Norway to Australia.

"Just heard you speak. You are stronger than the greatest athlete, have the courage of a war hero and the love of our creator seeded deeply in your heart. Your gift to humanity is not measurable. You inspire people, and you are going to help me be a better health care professional and friend. Thank you!"

Russell began to experience developmental and behavioral symptoms and struggles around the age of three. Despite numerous visits,  his parent’s desperate for answers of any kind, not a single doctor or specialist could figure out what was happening. In the spring of 2003, at the tender age of 12, Russell was admitted to the psychiatric ward at his local city hospital. He stayed there for five weeks, which were some of the most trying of his life. Still, he left the children’s hospital without a diagnosis – or hope – to return home with.

In the fall of 2003, Russell was diagnosed with autism at the University of Washington’s Autism Center. He and his family were relieved to have what they believed would serve as a roadmap toward proper treatment – although they knew the tough times were far from over.

Russell dropped out of public school in the 5th grade due to poor treatment from teachers and staff, and ultimately became a societal recluse for the next 10 years. During this time of solitude, Russell spent his days looking inward and pondering the existential questions surrounding his life. He prided himself on learning, for after having so much taken away from him, he realized that knowledge is one thing that can be given to you, but never taken away.

In 2011, still struggling and having no connections to the outside world, Russell found an outlet in his natural creative and poetic tendencies, and poetry soon became his best friend. He channeled the depth of his experiences thus far to write his acclaimed book “Inside Out: Stories and Poems from an Autistic Mind”. His book was featured in the LA Times, earned an Honorable Mention at the 2012 NY Book Festival, and won the award for Literary Excellency at the 2013 International Autistic People’s Awards in Vancouver, Canada.

Russell soon took an even greater comfort in learning and worked his way through online high school courses with laser-like focus and vehement passion, earning a 4.0 GPA. He also spent an extraordinary season breaking through comfort zones to shine in the athletic arena. He played football with the help of an encouraging coach and teammates and was honored as a member of the 2009 All-State Academic Team. Although Russell literally never uttered a single word to his teammates, he earned the utmost respect for his tenacity and work ethic.

Russell then spent two years taking online classes at his local community college (TMCC) in Reno, Nevada. He received straight A’s and was invited to be a member of the Phi Delta Kappa Honor Society.

It was through this journey that Russell discovered his true calling in life: helping those who shared his struggles and advocating on their behalf. This is when he turned his focus solely to being a voice for the unheard, for he knows how difficult it is to go unnoticed.

Russell’s name and story are known worldwide. Every presentation he gives uplifts, inspires, and increases autism and mental health awareness and understanding. He speaks honestly and authentically; his experiences resonate with every audience he speaks to. He has yet to give a speech that has not received a standing ovation.

In 2018, Russell presented in 20 cities all across the country. He ended the year with a true testament to his hard work: he was named Reno-Tahoe’s “Most Outstanding Professional Under 40”.

In 2019, Russell was back in a physical classroom for the first time in 15 years when he was accepted into "Leadership in the Digital Age" at MIT Sloan School of Management in Cambridge, MA. During this class, Russell immensely enjoyed his time, but not without some severe struggles. It occurred to him what he had been missing out on for the majority of his life, but he also knew that if it wasn't for his perseverance through his challenges, this opportunity would not have presented itself.

Later in 2019, Russell's second book titled "On the Outside Looking In: My Life on the Autism Spectrum" hit bookstores nationwide.

Russell continues to channel his passion to stand up for those who are not yet strong enough to do so themselves. He uses the hindsight from his traumatic and negative experiences to generate foresight for others in order for this world to become more compassionate, understanding and aware.

His goals are to erase the stigma and stereotypes that come with having a disability and to make this world a better place by spreading inspiration, hope, compassion, awareness, acceptance, belief, and tolerance.

To learn more about Russell and his dedicated work in autism and hope advocacy, please explore his speech history, published writing, and outreach efforts.

For more information about booking Russell for and event, learning more about autism, advocacy, or tips on how to get involved in the community, please contact us today!

Join Russell’s quest to spread awareness for autism and mental health! Sign up for our mailing list to receive updates on Russell’s advocacy, outreach efforts, and other news in the mental health community! (We promise never to spam you!)

For more information about booking Russell for and event, learning more about autism, advocacy, or tips on how to get involved in the community, please contact us today!

Join Russell’s quest to spread awareness for autism and mental health! Sign up for our mailing list to receive updates on Russell’s advocacy, outreach efforts, and other news in the mental health community! (We promise never to spam you!)